How to Improve the Star Trail Shooting

The night sky has been my biggest playground since I was young. I enjoyed playing imagination while looking at many shining stars. In my young eyes, I also reflected the dwarf star 'B-612' where the little prince lived. I can't leave out the horoscope. When I connected the big bear and the small bear with my finger, I was just emotional and choked up. The mother who turned into a bear and the son who shot an arrow without recognizing it became a star in the sky. However, a bright star night is turning into an unsympathetic memory with the next generation. That's why the night erased the darkness. It's a pity that the starlight is getting faded by neon signs and streetlights. However, staying outdoors at night away from the city to avoid the heat wave in summer is another way of my summering, and especially in winter, which is the perfect season to go looking for starlight and shooting the stars. The atmosphere is dry or much less humid, so there is less light scattering and so the stars shine so clearly and brightly. But winter is too cold outside. Paying special attention is to keep warm and maintain body temperature.

Star trail photography is a special experience of capturing the movement of stars that we cannot see with our naked eyes. It's not good in terms of cost-effectiveness, because only one image is produced when I shoot for at least four to eight hours, but it's attractive ineffably because it's something different and special for me that no one else experiences easily.

Back on topic, for successful Star Trail shooting there are several essential prerequisites . If you must check these prerequisites, you are more likely not to fail or will get better images than before.

Weather Check. Use several applications to check the weather that changes every moment. In particular, there should be no clouds. Clouds are the biggest obstacle to the stars in the sky. There are no clouds now, but clouds can form in an hour or a few hours, so you must check the movement of clouds in the forecast video or call local Meteorological Administration to check that. 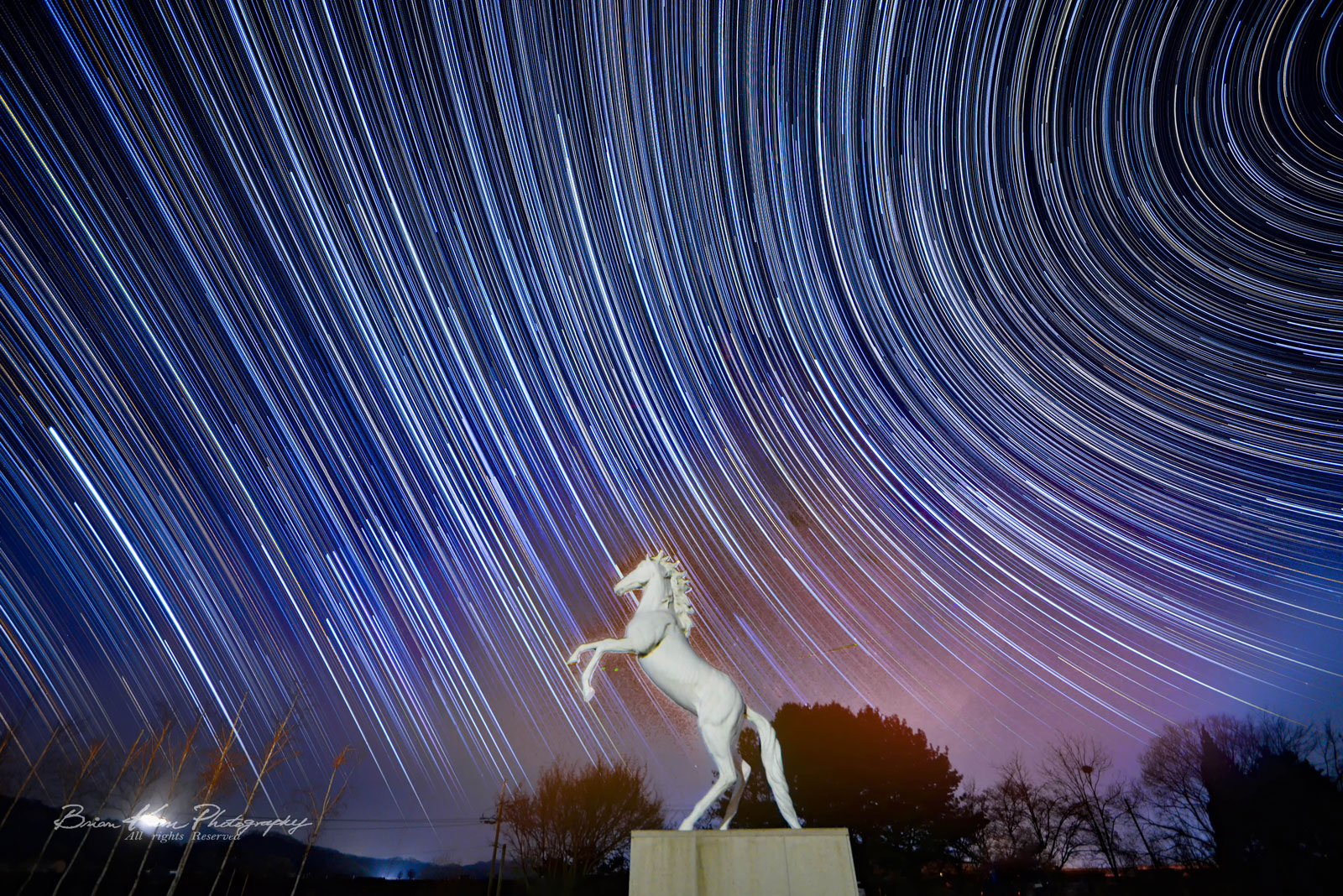 Presence of the moon. The moon is very bright because it is much closer to Earth than many stars, about 400,000 kilometers from Earth. If you shoot Star Trails when the moon is in the night sky, the stars appear very faintly due to the brightness of the moon, and the shooting fails. Therefore, you must check the phase of the moon for Star Trails shooting. When there is no moon, that is, you have to shoot Star Trails in between Moonset and Moonrise. You can also check this through the application. 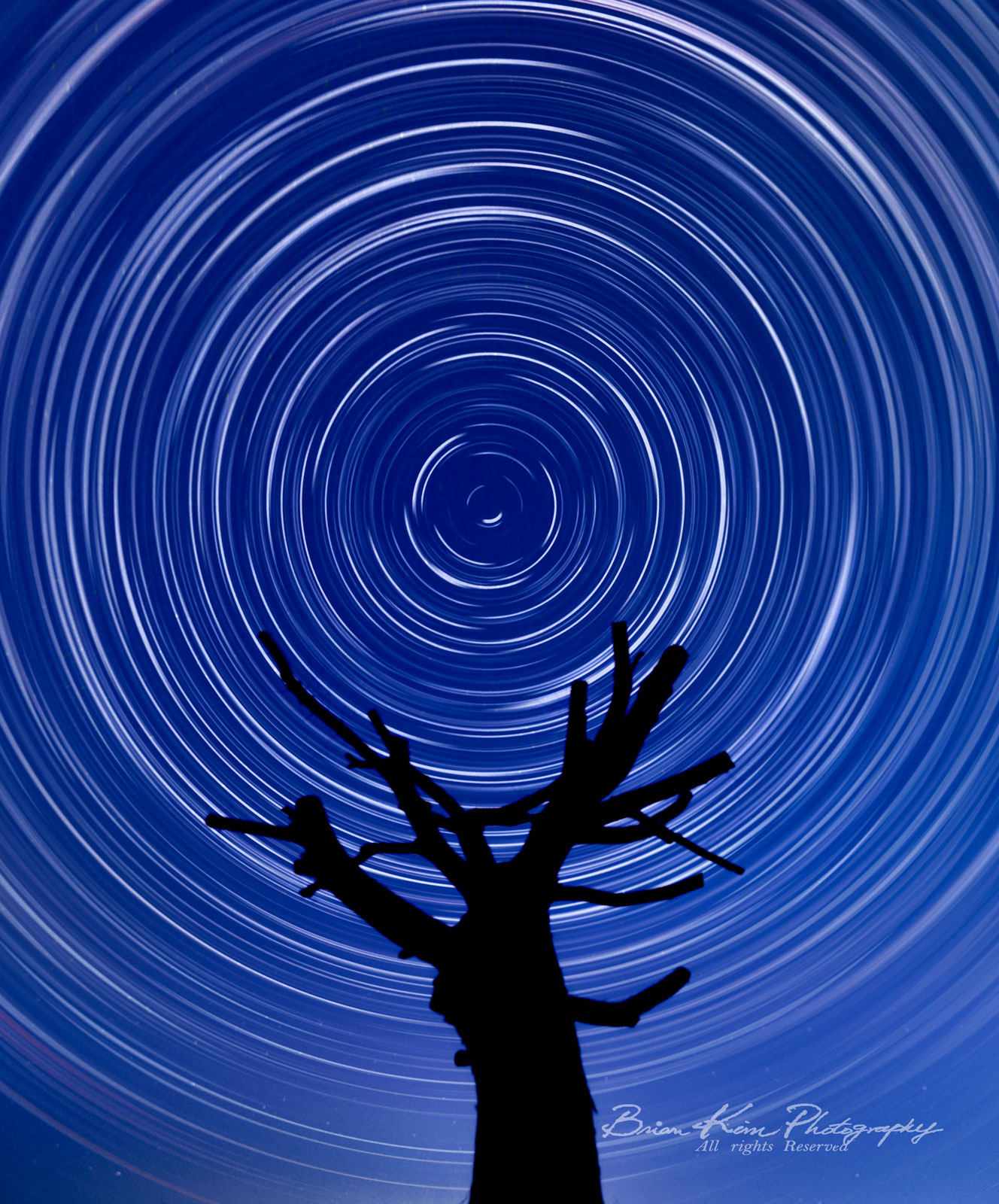 The humidity should be low. When the humidity is high, moisture acts as a curtain made of thin white cloth, making the stars invisible. 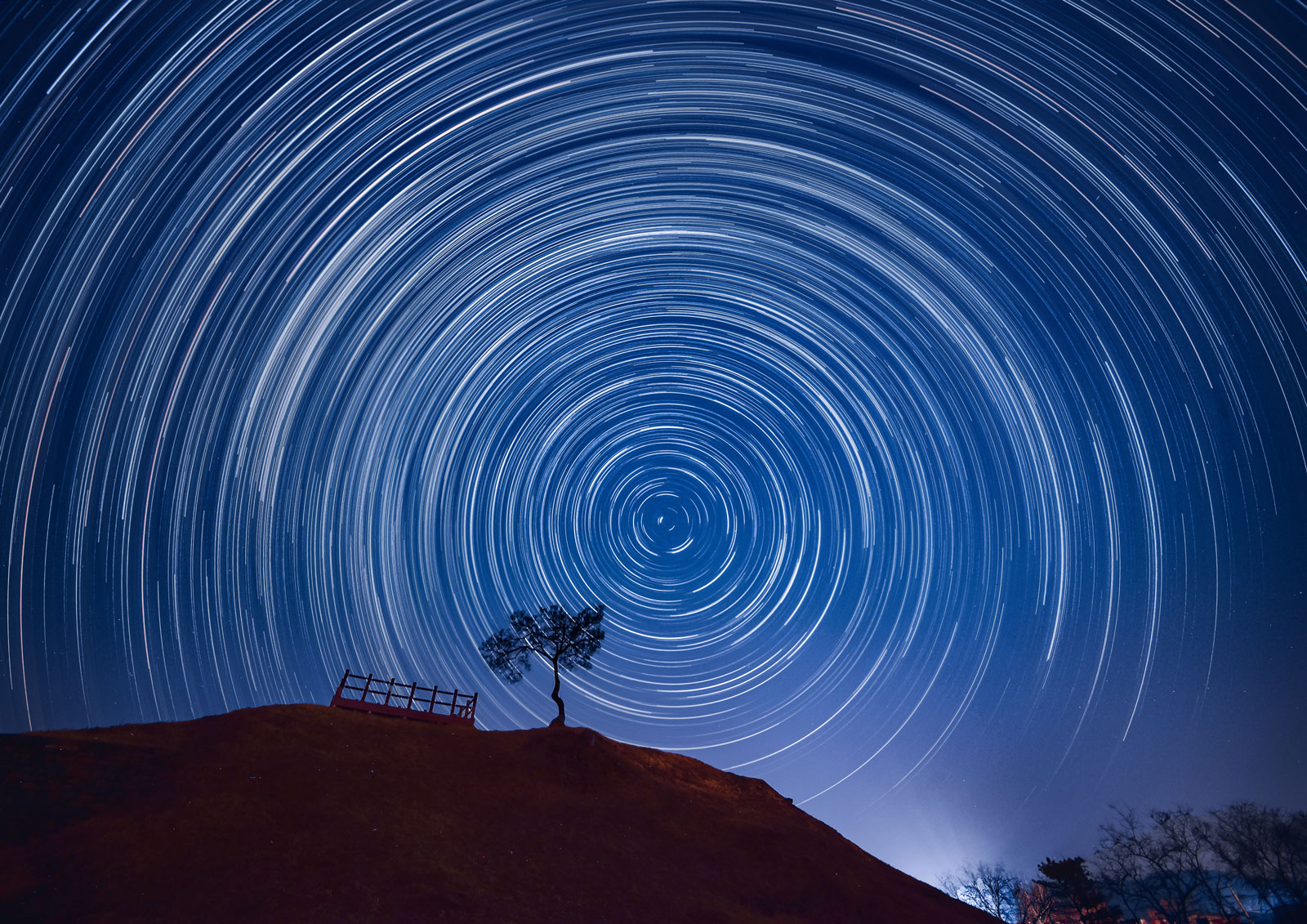 There should be no industrial or residential complex near the filming site. Strong lights in industrial complexes and residential areas make the night sky blurry, making it difficult to see stars. So that's why we're going very far away, hours away from the city, for star shooting. 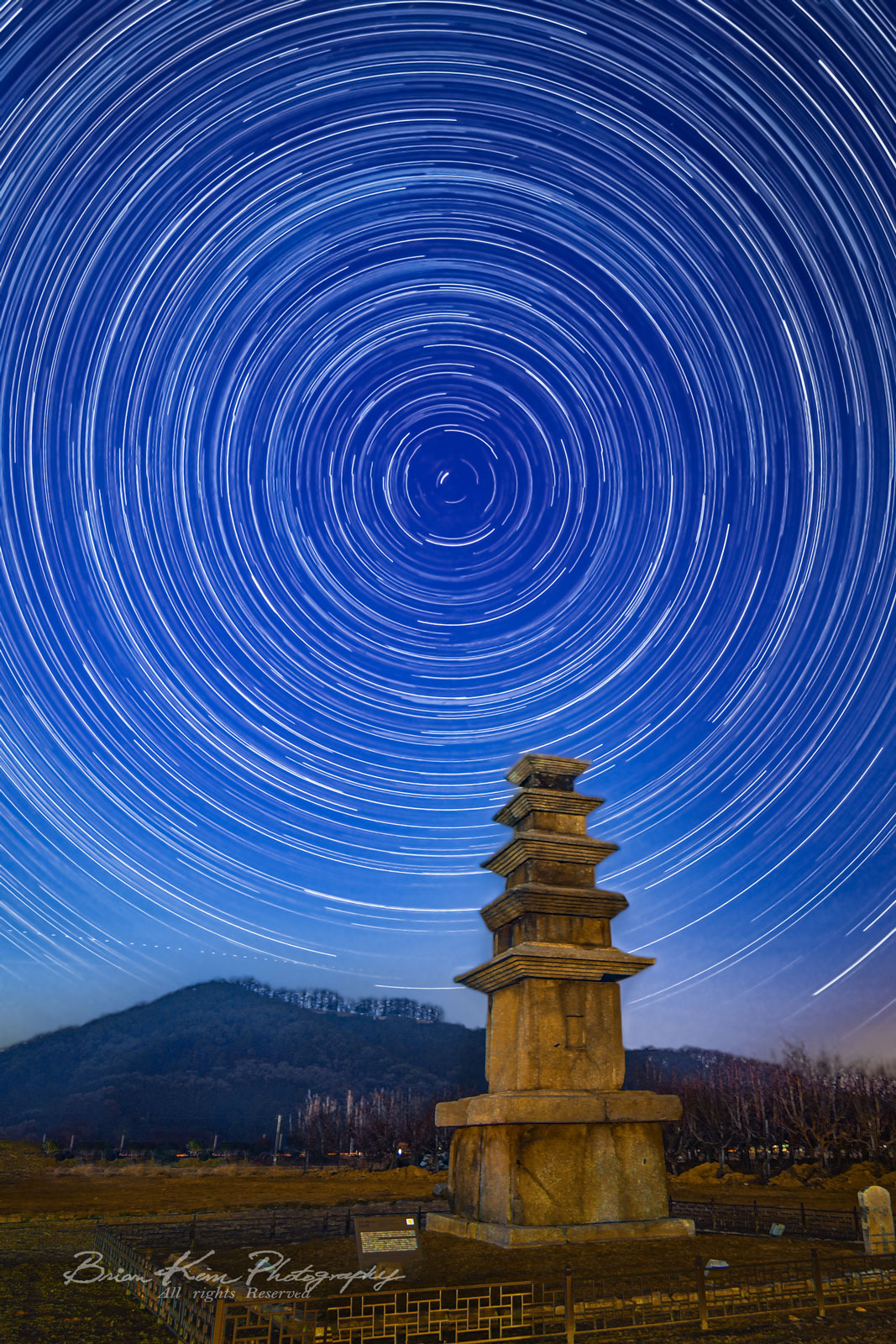 If you checked the basic and essential weather conditions above, you should now choose the camera lens well. Stars in the night sky are located so far away from Earth from hundreds of thousands of light years to millions of light years (which is absolutely impossible for us to travel now), so a lens with a bright aperture (F) is, needless to say, essential to capture the light of the stars. I mainly use the Tokina opera 16-28mm F2.8 FF, and so far I'm very satisfied with the strength that the aperture (F) is 2.8, which captures stars from a very long distance. 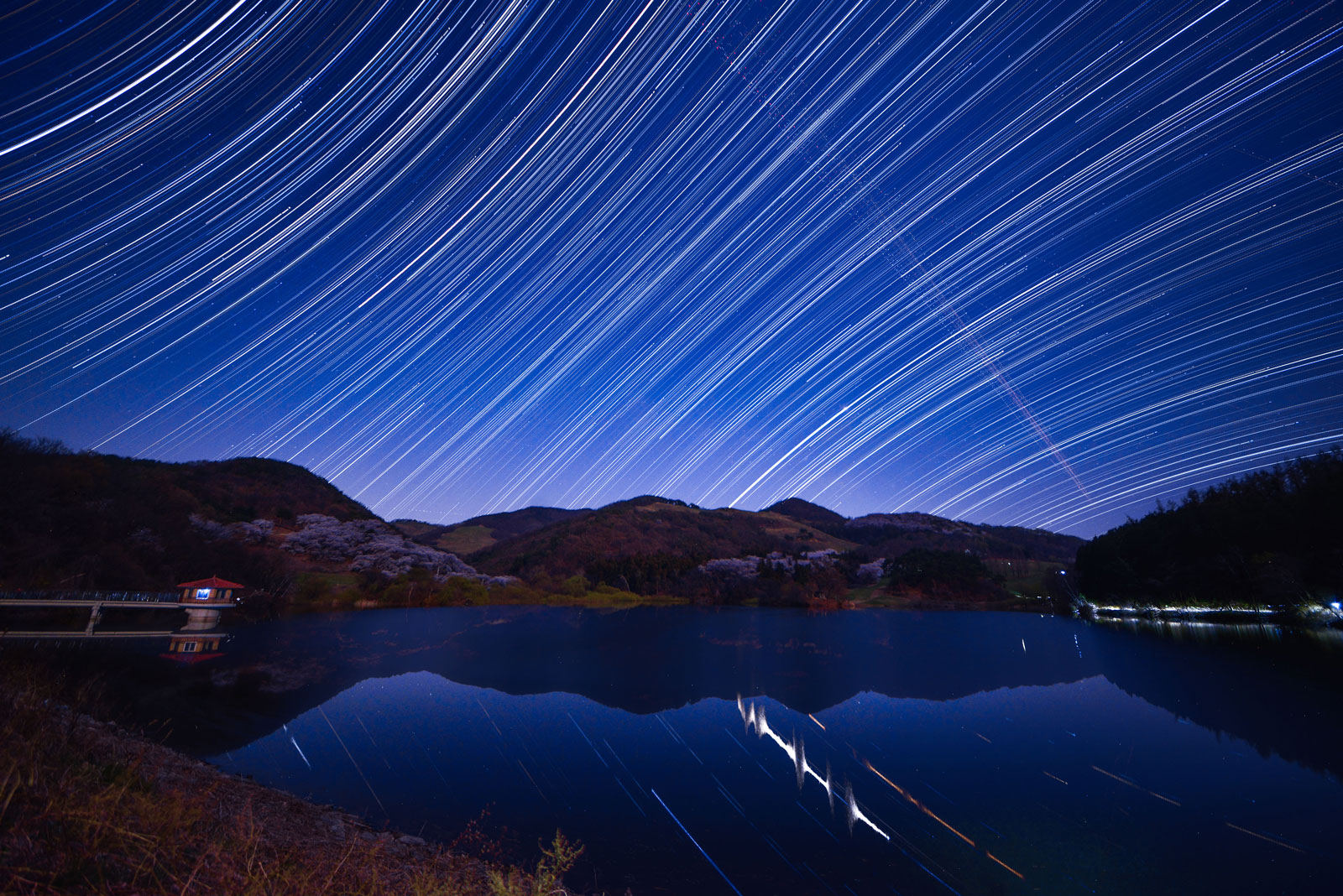 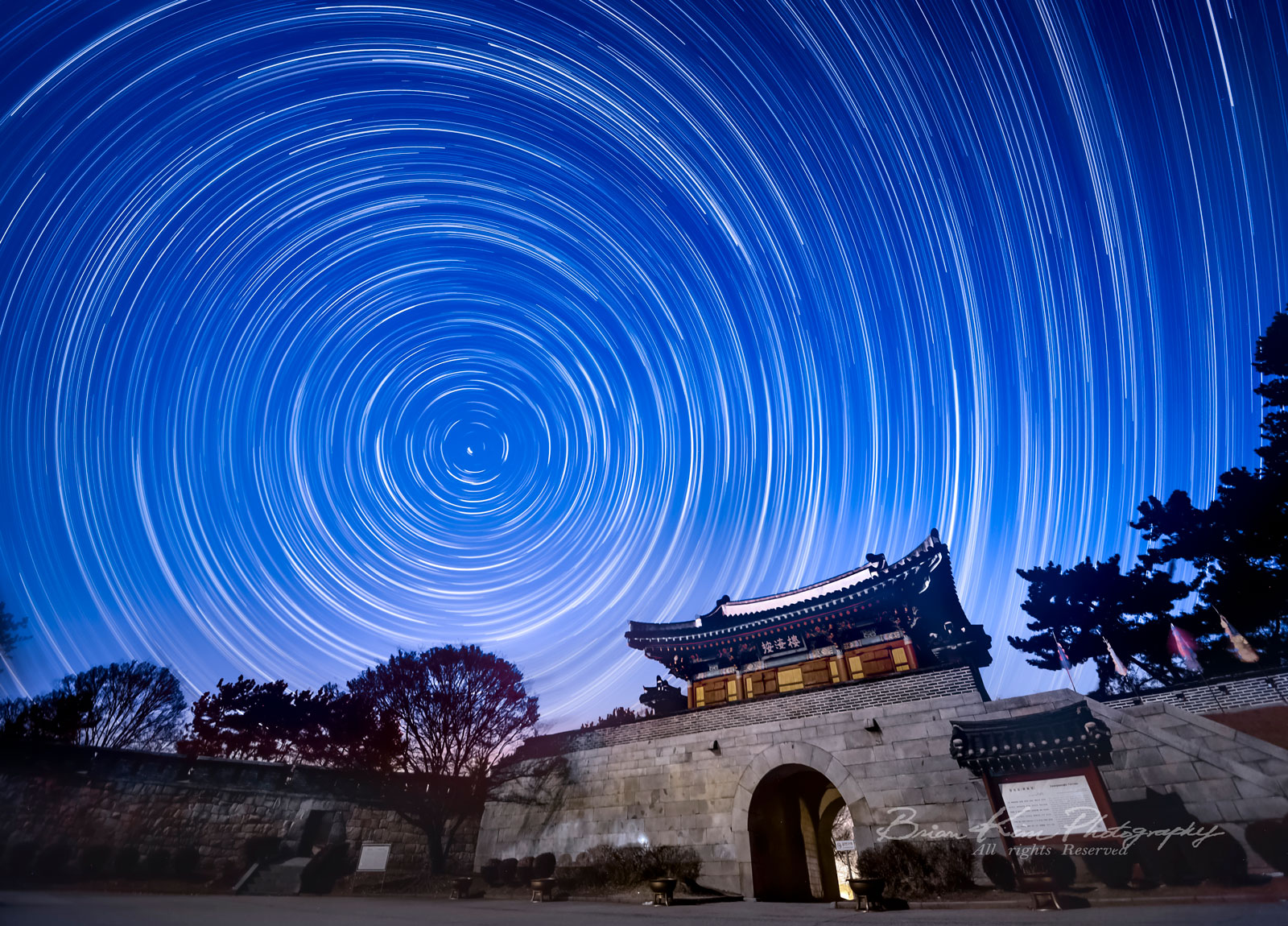 Battery issue of the camera. I usually shoot for 4 to 8 hours using 2 batteries or a large external battery (available for 10 hours) with a battery pack attached to the Nikon camera. In my experience, I use a Nikon genuine battery because the genuine battery is doubled as much capacity as a low-cost workalike or compatible battery. (I guess Canon battery is similar to this!) 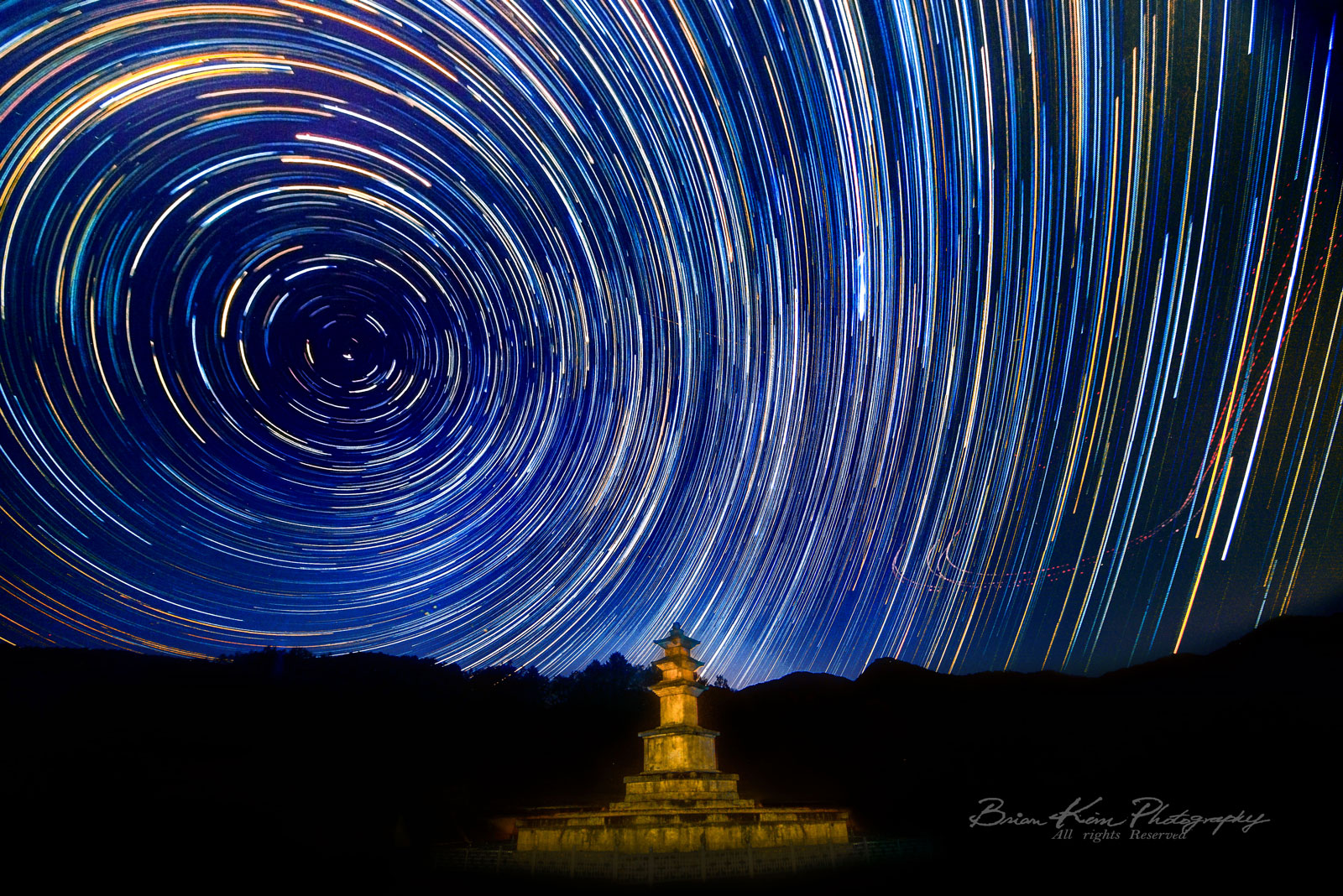 Tripod is recommended to be the largest and most durable. When I take 480 to 960 photos every 30 seconds for four to eight hours, if some of the images are shaken by the wind or the vibrations around the spot, I have to fail the entire Star Trail photo. 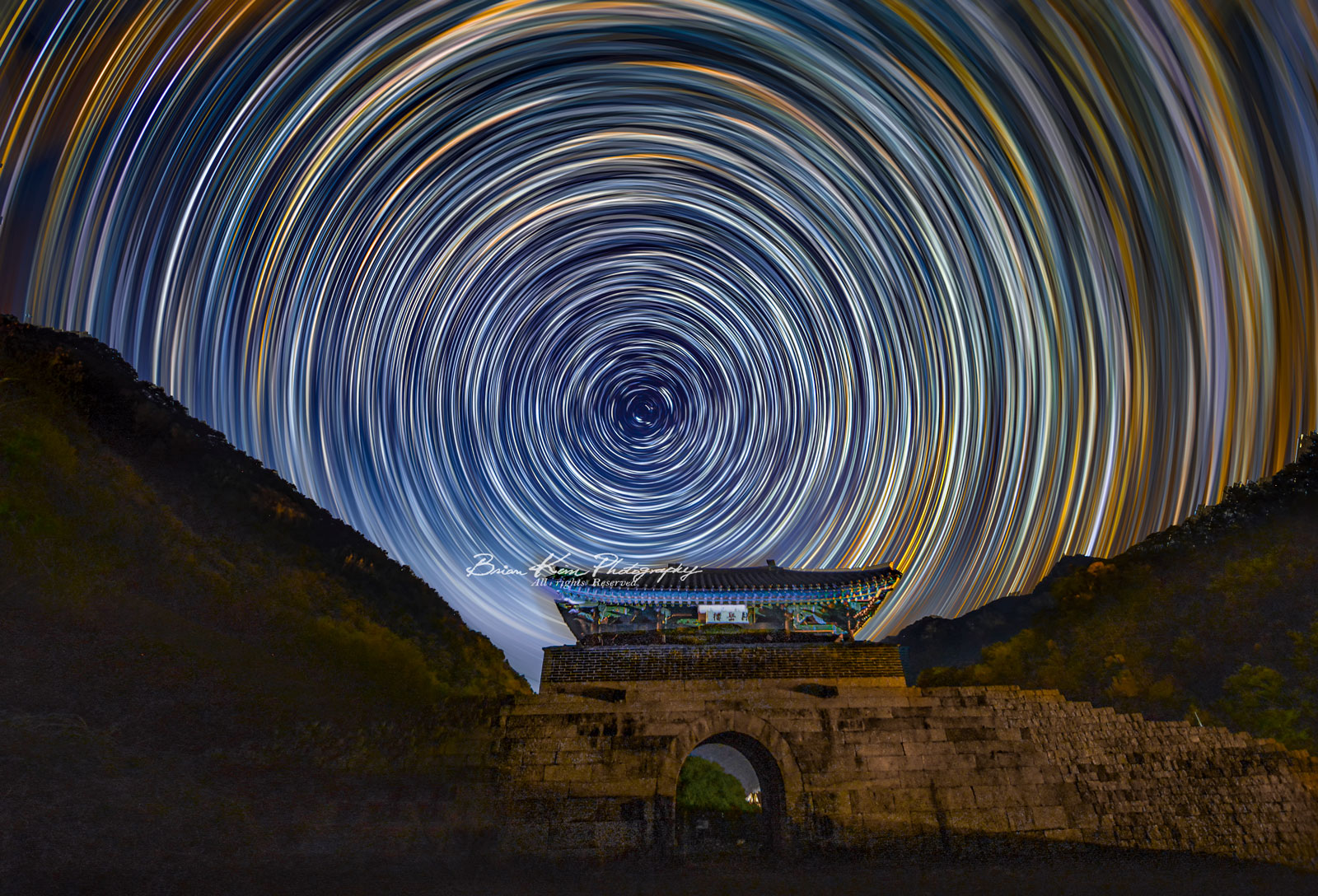 While shooting the stars for a long time, the lens gets damp in summer, and the lens becomes frosty in winter. To prevent this, a Lens Warmer must be installed.

How to focus in the dark outdoors. It's really hard to focus on the pitch-dark outdoors because there are no lights. However, it is mostly impossible to focus on stars because of their dim brightness. In my case, I use the method that on the way going to the shooting spot, first of all, I set the auto focus on the furthest part of the street, then transform it to the manual focus and then attaching tape to the lens to fix the focal length. This is a very simple way of focusing on the shooting of stars and the Milky Way.

Arrive at least an hour before shooting and find the sub-object under the star well to improve the composition. If you take pictures of stars only in the sky, you will get an image with a bad composition. For your information, I use an old Stone Pagoda, Castle, or Fortress as a sub-object.

It is basic to take an image file with a raw file, right?

For combining hundreds of files you took into a single Star Trail image, you need two kinds of programs. One is StarTrail and the other is StarStax. Both programs are available for free download on the Internet. As a result of using both, the StarStax is much faster than StarTrail, and it was more convenient to drag and move files. It is also a favorite program because it has a function to make Star Trail photos a video.

If you use the above skills as a basis, you can create a better Star Trail image, so I hope it will be of great help.

I will go further outside this weekend to meet stars and fairy tales in the night sky.