For the third consecutive year, I have visited the Arctic. For me, the greatest attraction of this place is the northern lights and a real winter fairy tale. The atmosphere here is truly dreamlike.

This time in March I went to Kandalaksha in the Murmansk region, and more specifically Volosyanaya Sopka (hill). In my opinion, it is the most picturesque with its snow-covered spruces and fairytale figures, although others are also beautiful, and I will definitely visit them.

On this trip I took Tokina opera 16-28mm F2.8 FF with me. This is a universal lens that has a good angle for shooting the northern lights and the night sky, and is also suitable for landscape photography. It captures the foreground nicely and conveniently. It is very fast-focusing, although I use that function less often. It survived severe Russian frost. The only thing is that switching from auto to manual focus didn't work in the cold, but I usually took pictures in the manual, and I don't think that's an issue at all, as the lens met my demands perfectly.

I climbed Volosyanaya to look around and assess the situation, to see locations and shooting points. Let's talk about the hill a bit. Where did the name "Volosyanaya" come from? Refer to the old tales. According to an ancient Sami legend, a long time ago, the sea cast ashore a huge whale near Kandalaksha, which remained lying on the coast, turning into a mountain. The "whale" is "Valas" in the Saami language. That is, this mountain near Kandalaksha was called "Valas" (Valasnaya), or in Russian - "Kit" (Whale). And it really looks like a whale, especially if you look at it from Luvenga. It is quite logical ancient name for a conspicuous sopka.

Subsequently, in 1905, cartographers of M.F. Reineke, without going much into history, marked this sopka on the map as VolosTnaya. Probably, the word "Volost" seemed to them more correct and solid, although it was only consonant with the historical name.

In Soviet times, most likely due to the unfortunate mistake of the Soviet cartographers, the sopka was named "Volosyanaya" (the material is available at https://kandalaksha.org/interesno/1329-o-chem-molchat).

There was not as much snow as I imagined. Just a week before I arrived, there was a thaw, and then a strong wind, and I realized that I would have to explore this area thoroughly in order to get even one good shot. In the evening, when I came to the base camp and had some rest, I decided to go out and take as a souvenir some photos of the house I was staying at.

It was the very first picture of the night sky, shot with Tokina. I wanted to see how it worked, and I was satisfied. Good focus, good autofocus, which worked well even at night. I focused on the light of the house from the window. 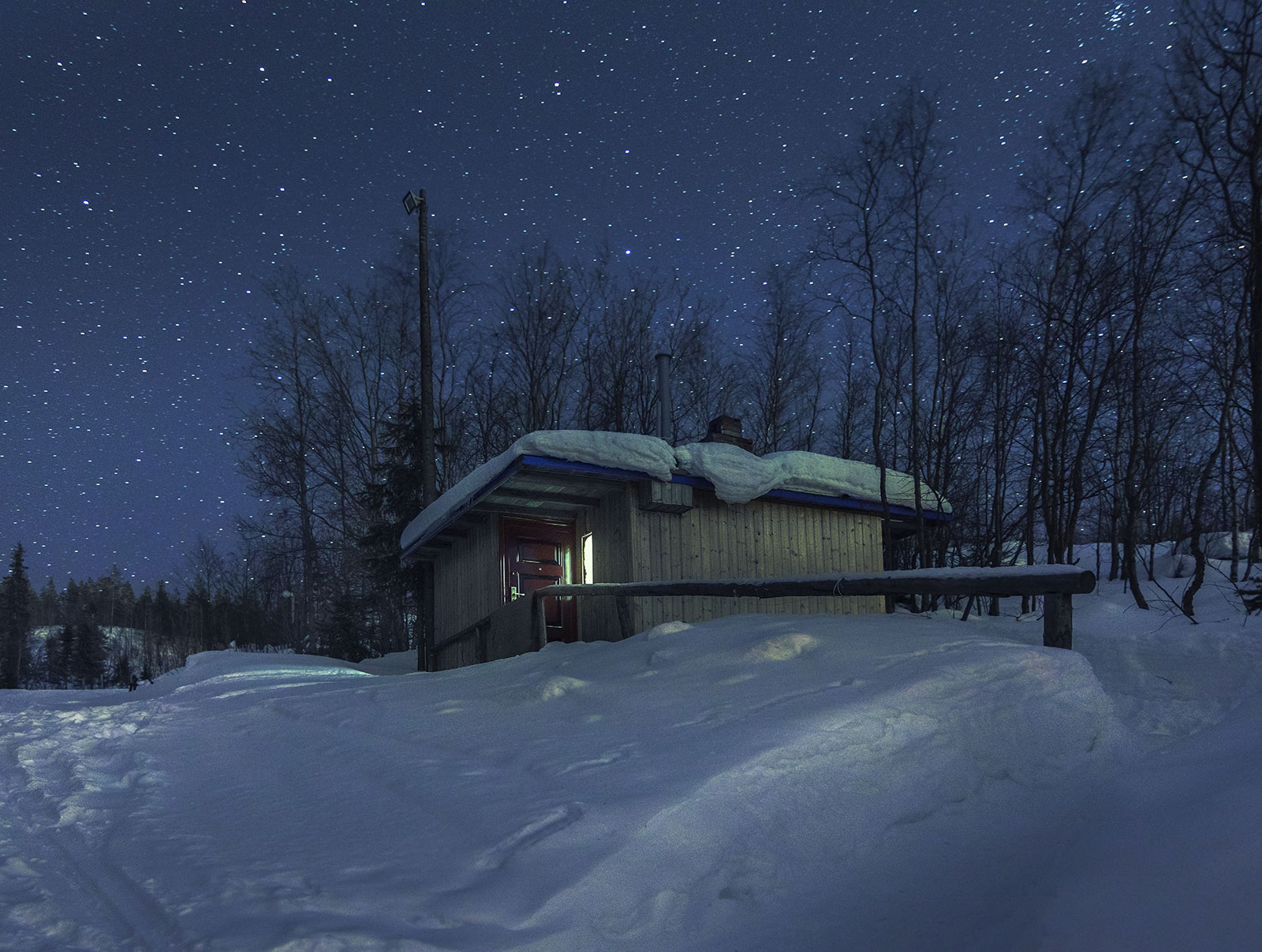 I went further searching for places, since I did not find anything suitable on the day of scouting. On my way, I saw an amazing place, but the sun was high in the sky. I decided not to leave this place, look around well, and wait for the sunset light. Finally, after waiting for three hours, I got what I was waiting for.

This is perhaps my favorite shot from this trip, which I took in the daytime. I was looking for a snow arch like that with an interesting distant view. I wanted to capture something like a door/window so that the viewer would bend slightly to walk through it. Here, I used focus stacking to take two shots: first, focusing on the foreground, and the second was long shot. Together with Canon 5D Mark4, I did it very quickly with the touchscreen using autofocus. 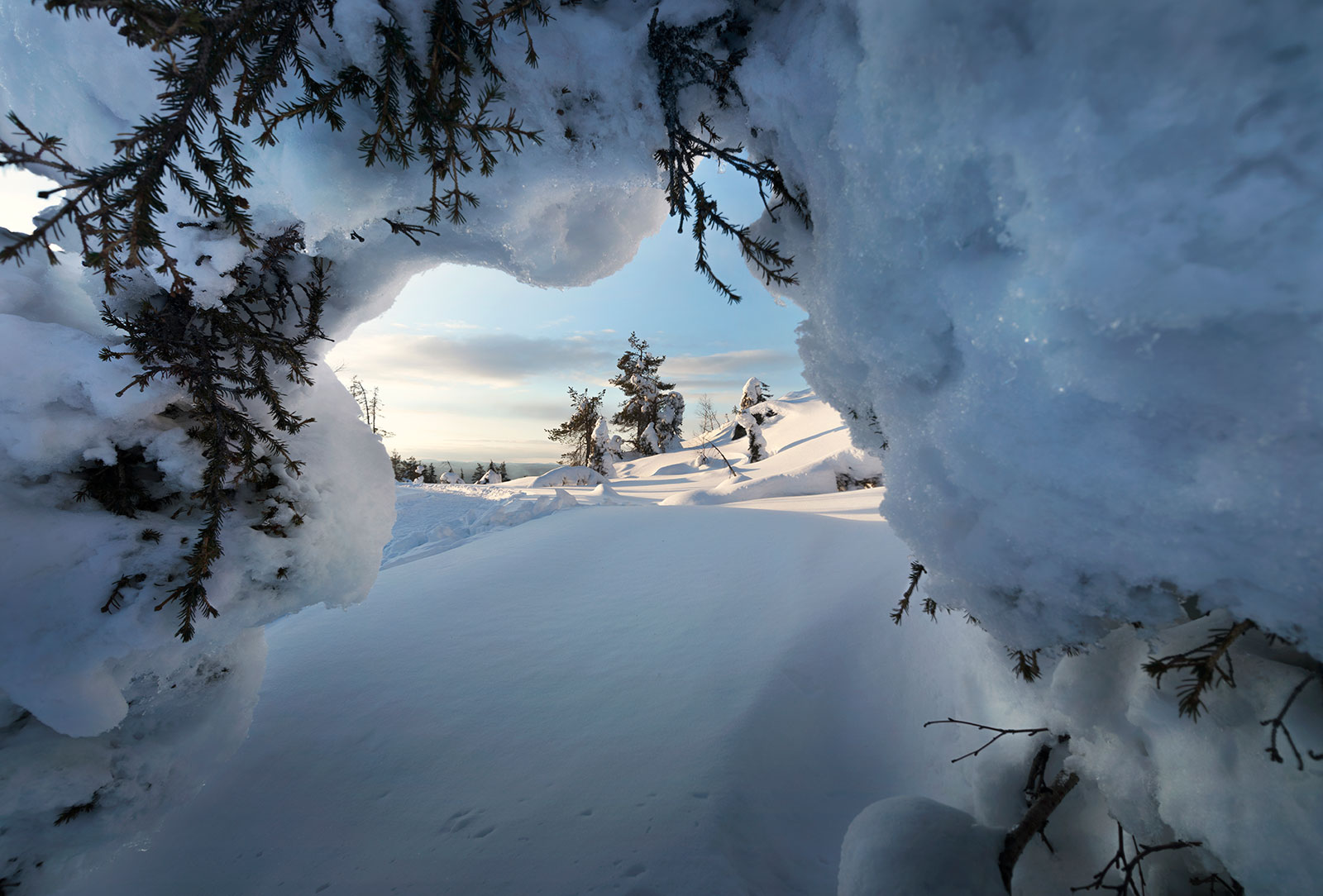 There were the northern lights at night, but I was already going down, so I was shooting the house. The atmosphere in the house was pleasant, warm and comfortable, and there was the harsh Russian winter outside with all its consequences.

That night was fairytale. In our cozy house, the stove was puffing away with warmth, the frost cracked outside, and spruces had their shaggy paws wrapped in snow blankets. And the sky, the winter sky flared with fiery ribbons, teased me with green dragon tails, painting its magic story, and it was impossible to look away from it. At such moments, you somehow forget about the frost, and that you need to take pictures.

Enchanted by a fire show in the sky, I stood and thought: surprisingly, in order for the fairy tale to come true, in order for the magic to happen, very simple, real things are needed, which are not magical at all.

You need to come to the north, you need a shaggy winter forest, a house with the smell of wood, warmth of living fire in it, your hands to take firewood and make a fire, and the burning breath of the solar wind to light up those real and dreamlike light patterns.

For all that, I decided to shoot and show the maximum viewing angle of 16mm. 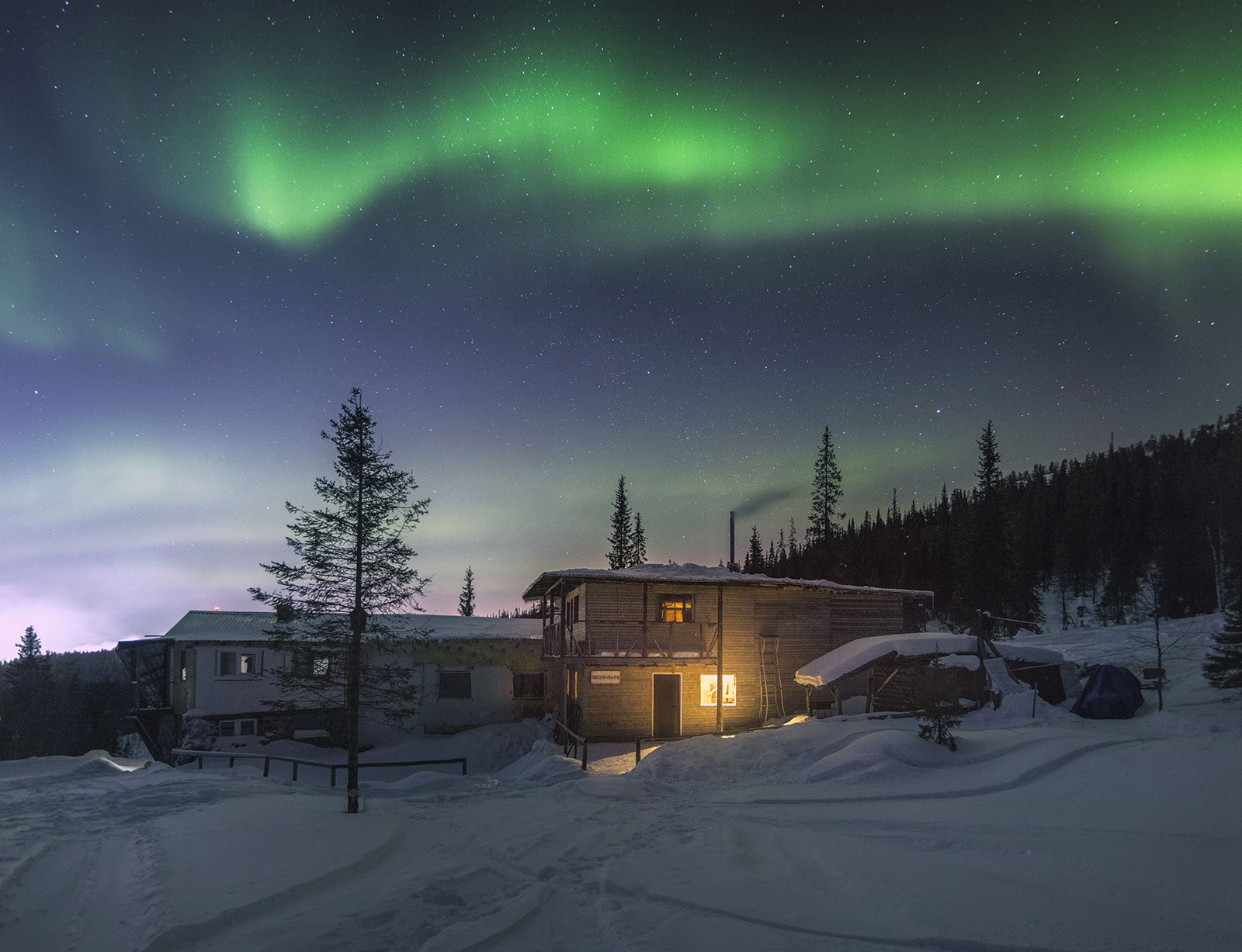 For me that was the farthest "run". I headed right to that place where snow-covered spruces should be. And I found them. It was a small clearing in the wood, where small areas still remained in corners, so the wind did not get to them.

The picture is valuable even just because spruces had almost no snow on them at that time, and I was able to find it, despite the long journey. In addition, there was a beautiful sunset light. I could not resist that. 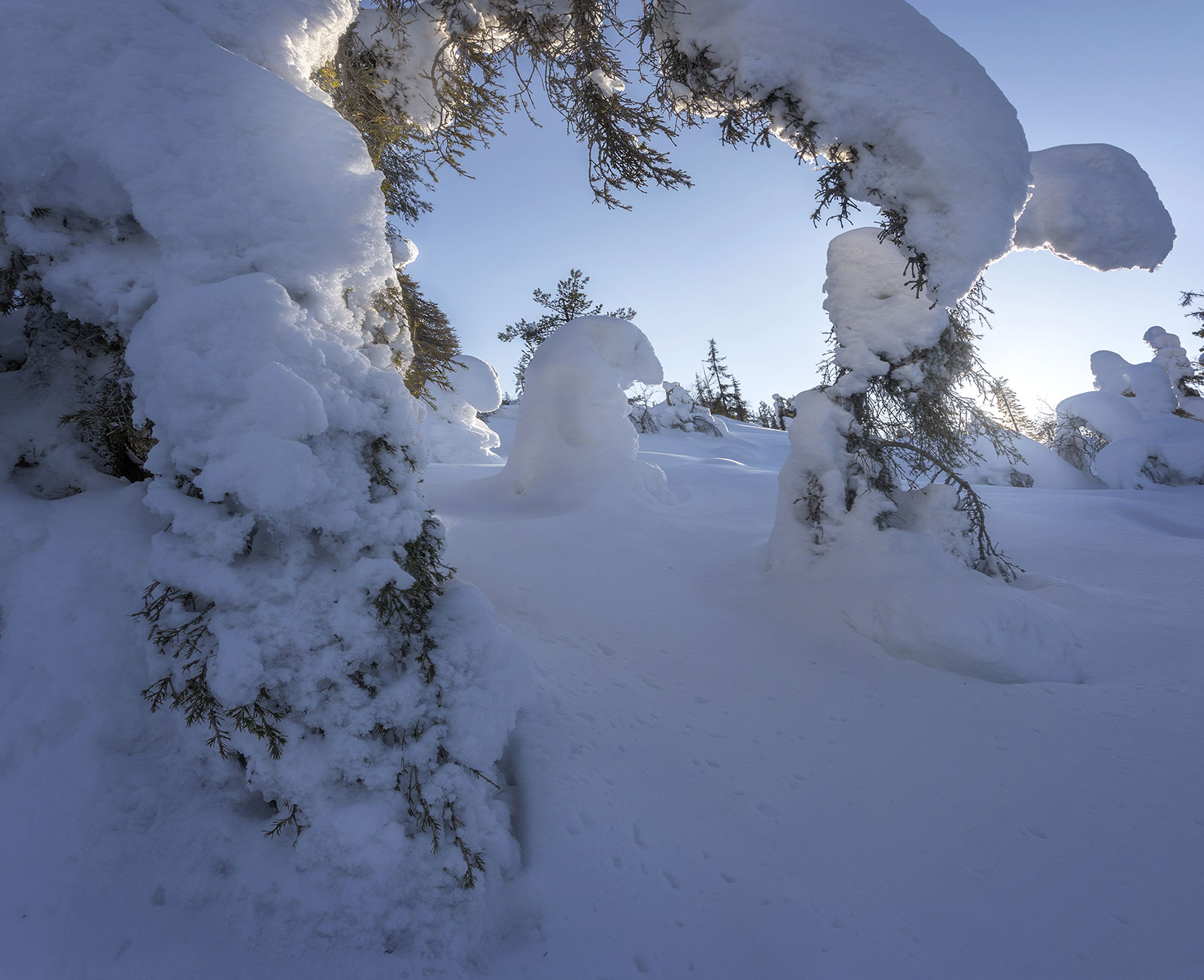 It was an open area where you could see spruces taking their snow-white fur coats off. However, one thing stood out against their background, and was similar to the Loch Ness Monster, which literally appeared in the middle of the sea, so I could not pass by and not to take a picture. 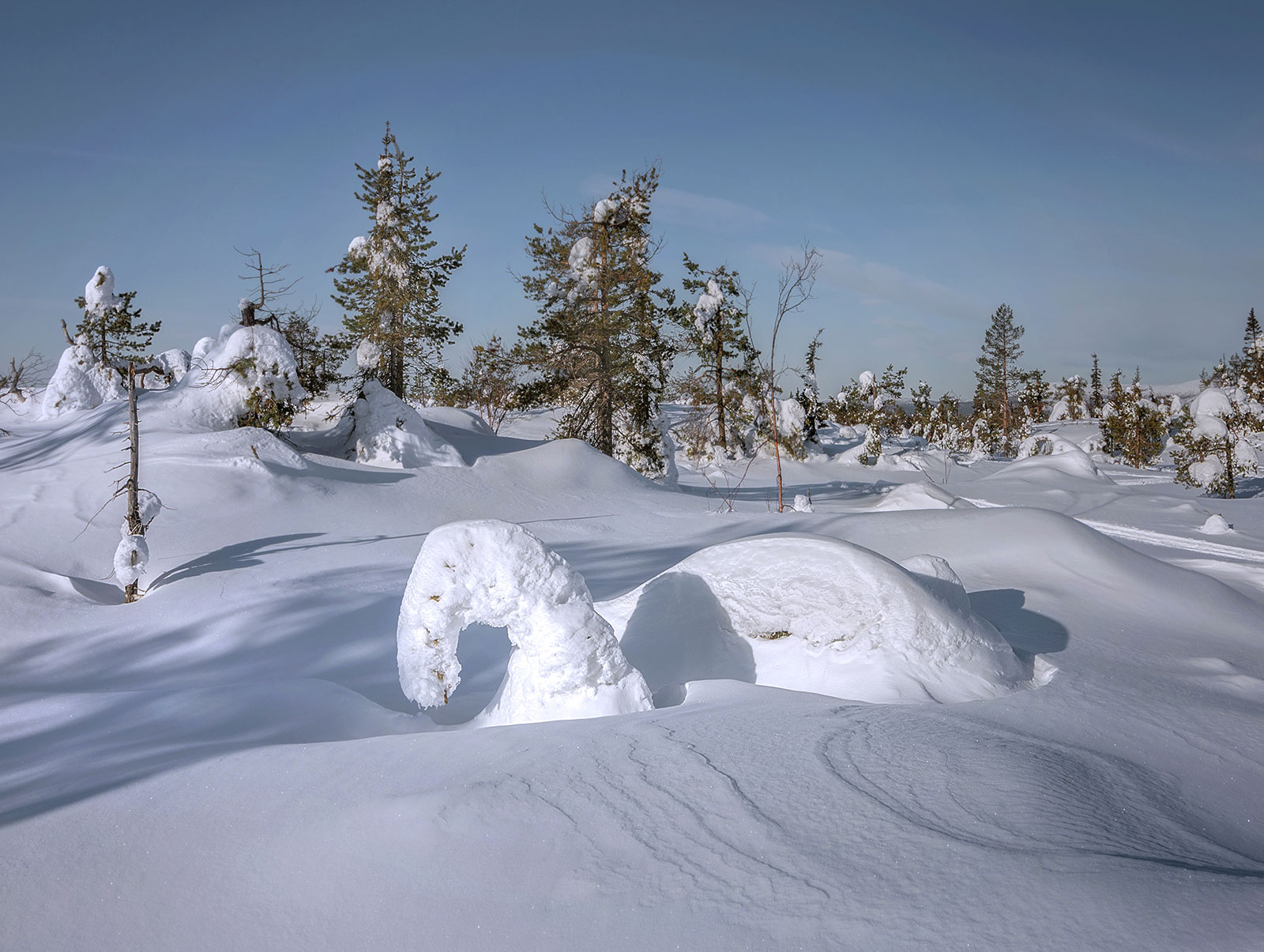 Later in the evening there were the northern lights again, which I took pictures of. You can see Kandalaksha in the distance. It is a small city, so the illumination from it was low. It is unusual to see how a band of the northern lights stretches over the town deep into the forest. 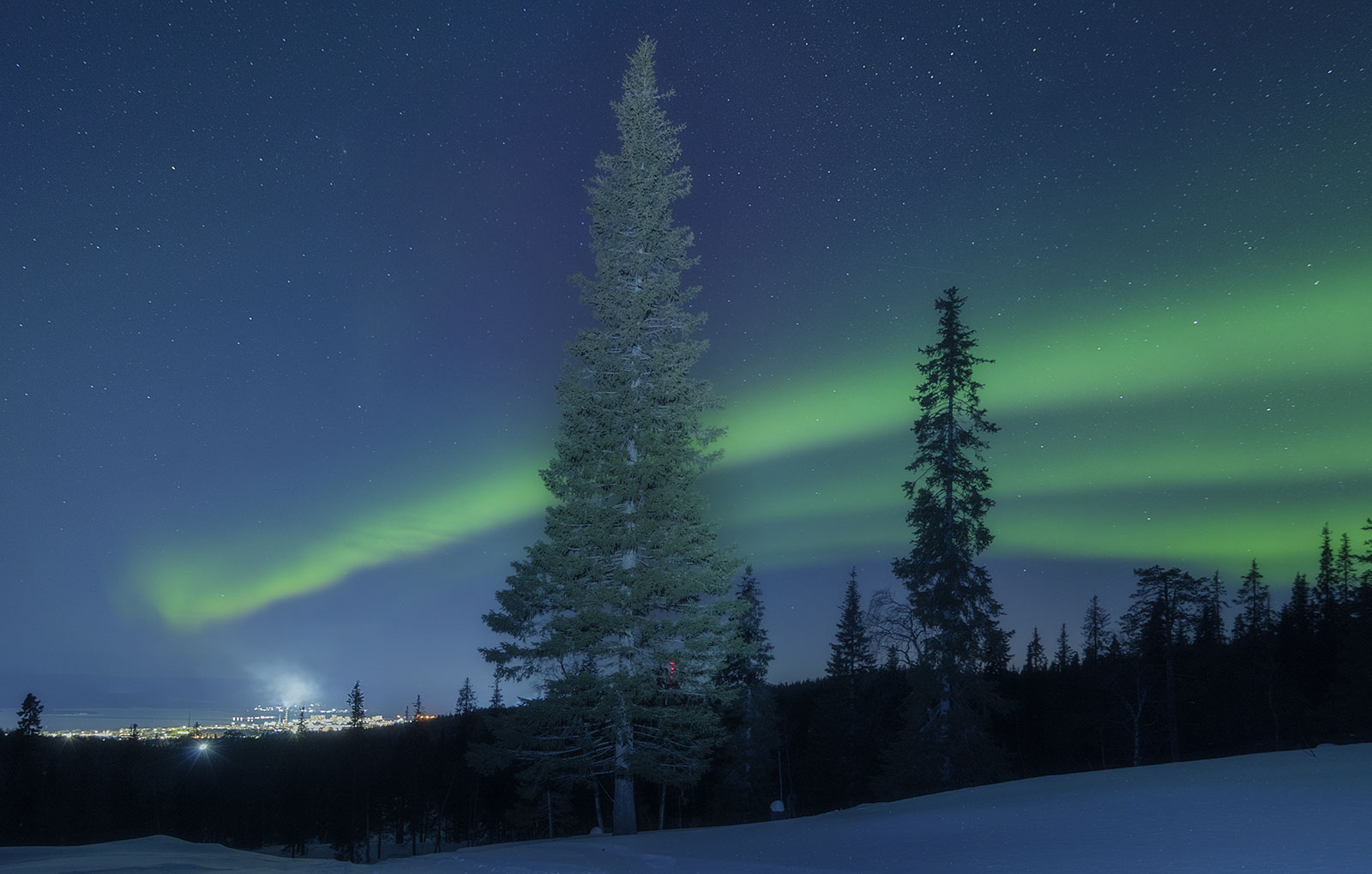 Some structures were covered with a thick layer of snow. I wanted to show here the height of the snow cover, but it can be even higher. 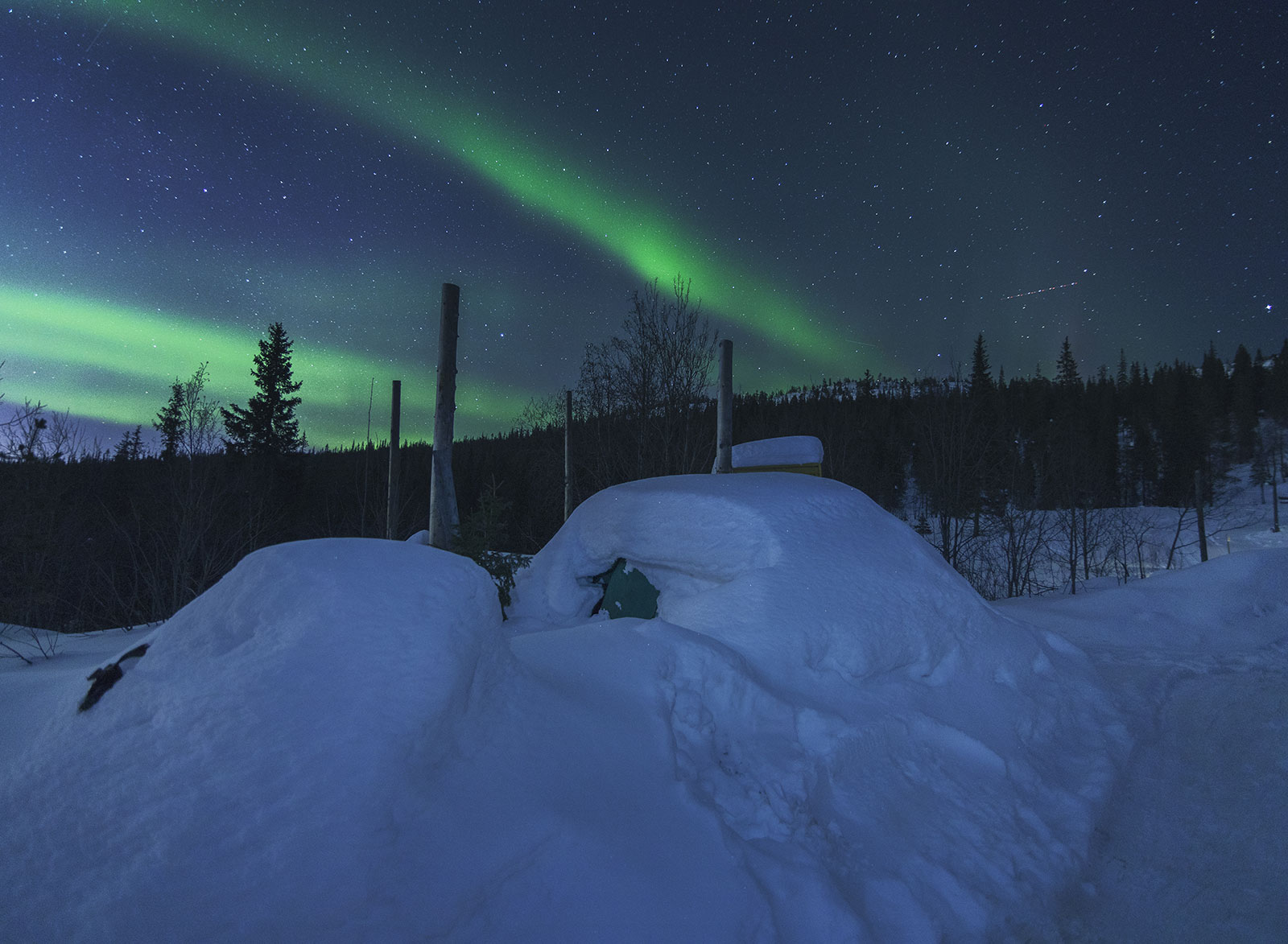 The purpose of this trip was to see and capture the northern lights, and I did it. Preparing for the trip, I paid attention to the phase of the Moon, so that its light did not interfere with shooting, and the colors from the lights were brighter and could be seen better. I went when the moon was crescent. Then, using special programs, I monitored the activity of the northern lights and weather conditions. Fortunately, everything went well during my short trip.